If you're visiting the village of Ribchester in the Ribble Valley, step back in time with a walk through the free Roman bath house ruins. 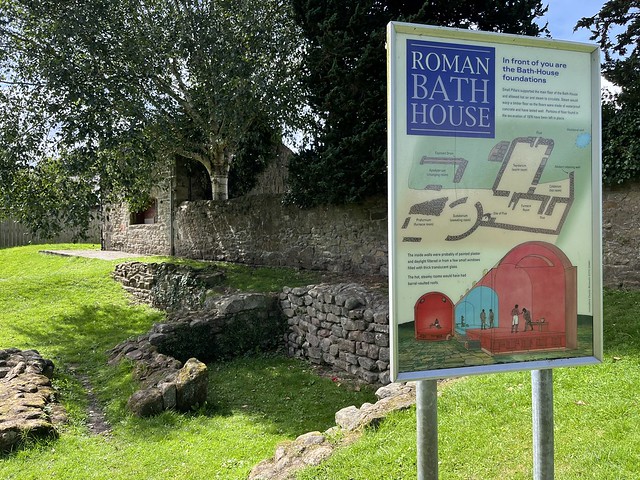 Ribchester means 'fort beside the Ribble'. The Romans knew it as Brematennacum. The bath house was built around 100 AD. It served the needs of the Cavalry soldiers and the local Romano-British population.

Furnaces heated the rooms, so to reduce the danger of fire the bath house was built outside the fort walls. Small stone pillars supported the concrete floors of the bath house and created a space below the floor. This allowed the hot air and steam to circulate. We know from other surviving examples that the inside walls may have been coated in plaster. Daylight would have filtered in from a few small windows. The hot, steamy rooms had barrel-vaulted roofs.

A visit to the bath house was an essential part of daily social life. Men, and later women, could meet their friends, chat, and exchange gossip. They might make business deals or take part in board games or gambling. Bathers would enjoy hot pools and sweating in steam rooms to open the pores in their skin. Bath house attendants were often slaves. They used curved strigils to scrape the sweat and dirt from the bather's skin. The bather then passed into cooler rooms, and finally into a cold plunge bath. Being next to the river ensured a good supply of water.

On your visit you can still see the remains of the sweating room (sudatorium), warm room (tepidarium), and hot room (caldarium).

The bath house fell into disuse about 225 AD. Over the following centuries much of the stone was removed and re-used. Increased interest in Ribchester in the 1800s led to archaeological excavations. In 1796 the magnificent Ribchester Helmet was discovered. It is now on display in the British Museum, London.

Further excavations took place in the 1970s. The many thousand finds included coins, jewellery, and pottery. These are now part of the collections held by The Lancashire Conservation Studios & Collections in Preston. The excavations showed that the earliest use of the site was in the Bronze Age, over 4000 years ago. The excavations also revealed that the bath house buildings were later enlarged in a second phase of building.

The site is open to the public free of charge all year round, 9am until dusk.

Please note: The bath house is separate to Ribchester Roman Museum where an admission charge may apply.

How to find us

M6 junction 31, follow A59 towards Clitheroe for approx. 4 miles to traffic lights. Turn left for Ribchester B6245 (Ribchester Road). Parking is available opposite Ribchester playing fields and Greenside is a 5 minute walk from the car park.

Plan your journey and view bus timetables for your area and train times (external site). There is no train station at Ribchester. 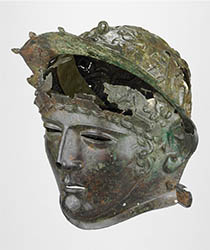 Copper alloy cavalry helmet with face-mask visor. Decorated with a scene of a skirmish between infantry and cavalry.

© The Trustees of the British Museum. Shared under a Creative Commons Attribution-NonCommercial-ShareAlike 4.0 International (CC BY-NC-SA 4.0) license.