We are building a major new road - the Preston Western Distributor, which will link Preston and southern Fylde to the M55 motorway.

Scheduled to open early in 2023, this £200m road scheme is the biggest new road programme in the Preston, South Ribble and Lancashire City Deal.

It will help to promote new housing and business development in the area, while increasing capacity on the existing local road network.

The Preston Western Distributor will link the A583 and the M55 motorway and will involve the construction of: 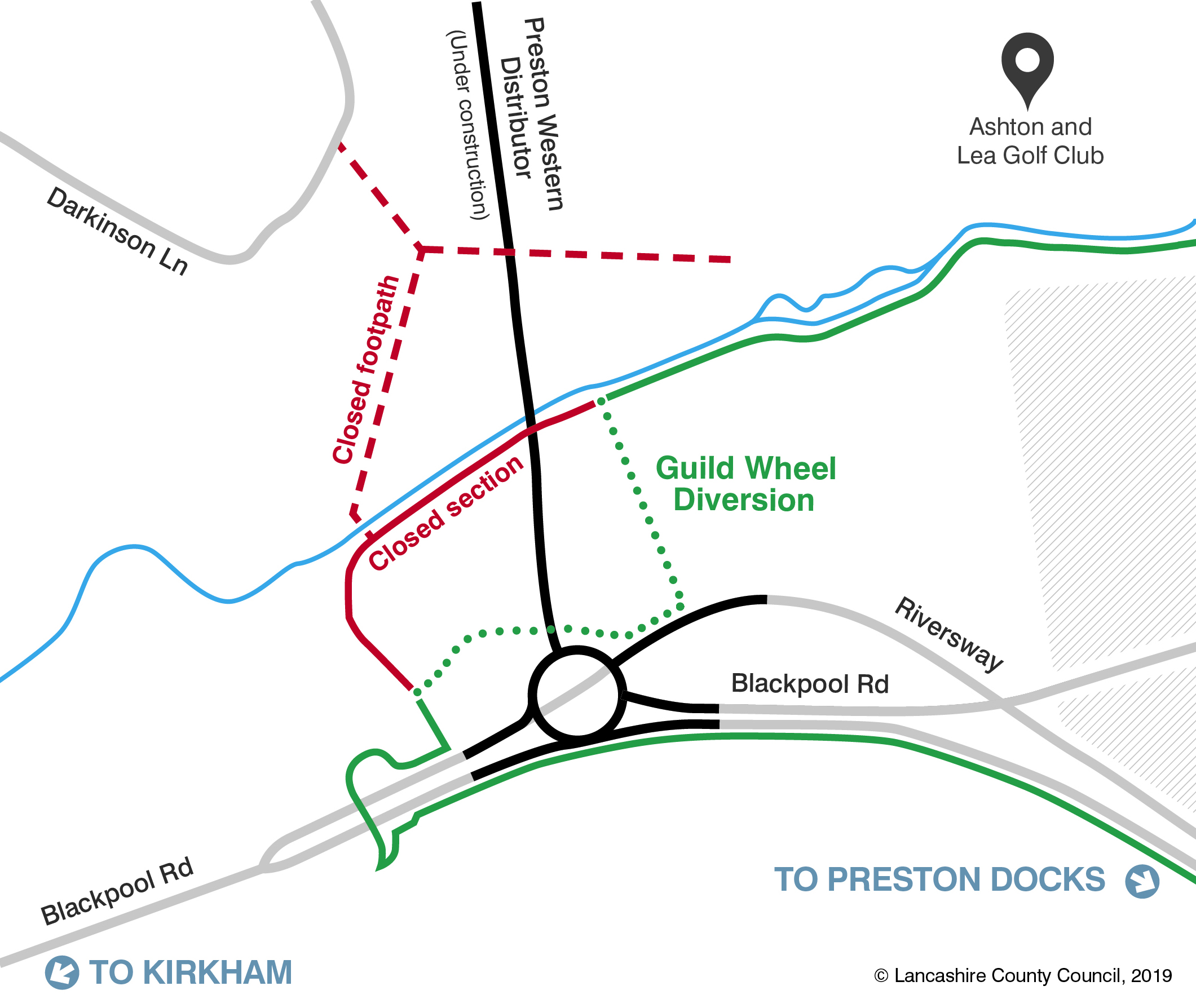 A short diversion to the Guild Wheel route on the west side of Preston is being put in place from Monday 6 January. The change is for safety reasons during construction work on the new Preston Western Distributor road scheme, near the popular walking and cycling route. This will affect people on the Guild Wheel between Savick Brook and the bridge over Blackpool Road. Coming from the bridge, the route will temporarily run towards the side of Riversway and then up towards Savick Brook. Once the construction work has finished in 2023, the Guild Wheel will be able to return to its current route. 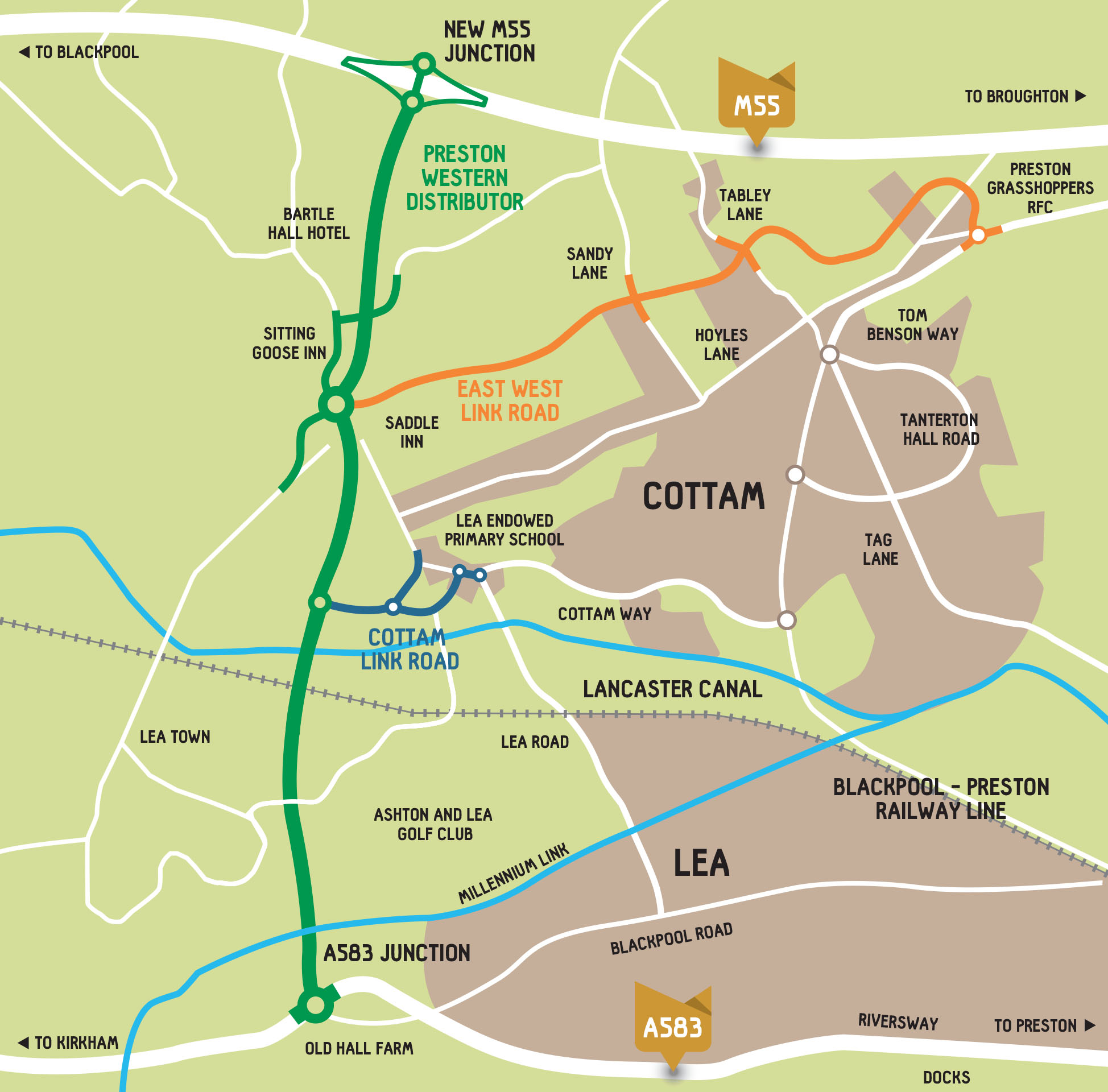 View the fly through of the route for the Preston Western Distributor.

These are the latest planned timescales to complete this road programme, as with any construction project of this scale, this timetable may be vary:

The scheme received full planning approval in November 2018 and in March 2019, the Secretary of State for Transport confirmed the Compulsory Purchase and other legal Orders necessary to enable the roads to be constructed.

Why we are building the new roads

As the working age population in Lancashire is decreasing, we need to build on the sustained economic growth to keep young people in the area and bring in more skilled workers.

We need to make sure that the road infrastructure supports our ambitious plans across North West Preston including 5,500 new homes.

The documents below provide information about the measures we are taking to help protect the local wildlife population and heritage of the local area:

This is a City Deal scheme and has been made possible due to the partnership agreement between the Lancashire Enterprise Partnership, Lancashire County Council, Preston City Council, South Ribble Borough Council, central government and Homes England.

City Deal is helping to deliver accelerated infrastructure, homes and jobs across Preston and South Ribble, with wider benefits to Lancashire. It is supporting the creation of more than 20,000 new private sector jobs and over 17,000 new homes built across the area, along with new school places, open green spaces and new health provision to cater for a growing population and workforce.

Find out more about the Preston, South Ribble and Lancashire City Deal

Funding for these new roads is coming from the Department for Transport, Highways England, the county council, City Deal and the Lancashire Growth Deal.

The construction of the scheme is being carried out by Costain Construction, on behalf of the county council. Costain also built the Bay Gateway which links parts of Lancaster, Morecambe and Heysham with junction 34 of the M6.

You can sign up to get email updates about the scheme.

If you have any questions email: PWDhelpline@costain.com.