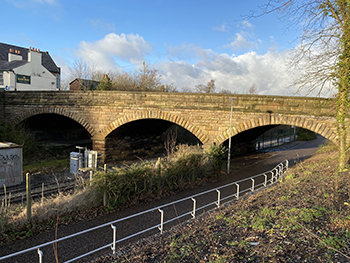 Lancashire County Council is preparing to carry out vital safety improvements to Derby Street Bridge, which is located in Ormskirk town centre, and carries the A570 over the railway line which links Preston and Liverpool.

Derby Street Bridge was built in 1848, and was not designed to carry modern traffic. Work is now needed to make it safer and strengthen the bridge. The current footways on the bridge are too narrow for pedestrians to use safely, and the narrow traffic lanes increase the risk of a collision which could impact the bridge and affect the safety of the railway which runs underneath.

The proposal is based on detailed traffic modelling, a tried and tested method of testing what impact any change to the roads will have on traffic.

A computer-based model has been produced using real-life traffic surveys and information captured by cameras which monitor traffic levels on the bridge and in the surrounding area.

This comprehensive set of information has been used to provide a robust assessment of the impacts on the area being modelled, together with any knock-on effects on roads across the wider area. This work resulted in a simulation of the way traffic uses the area to show real-time traffic movements.

Testing the impact of reducing the bridge to one lane

A trial or pilot scheme would only provide a snapshot of the impact at the time, and can be influenced by other factors – such as traffic being quieter than normal, or an incident nearby causing more traffic. It is therefore not as reliable as producing a computer model using survey data collected over an extended period of time.

However, we have recently observed the bridge operating with a single traffic lane during recent work to take 'core samples', as part of our preparations for the maintenance scheme, including during the morning and evening 'peak hour' for traffic, and were able to see that traffic flowed freely over the bridge as predicted by our previous traffic modelling work.

The estimated project cost for delivery of the works is £2m. This represents a significant investment in the Ormskirk transport system and will ensure that the bridge is safe for use by all and that it will continue to remain an important feature of the Ormskirk town centre conservation area.

How long it will take and how it will be done

The work is currently planned to take place in 3 phases over an 8-month period. Some of the work will take place from underneath the bridge so this will not involve any changes to the road above.

The road will stay open to traffic throughout the work with a single lane during the day. There will be some limited overnight closures to carry out work that cannot be done while the road is open.