What is happening and why

The A582 in South Ribble is one of central Lancashire's busiest roads suffering significant congestion at peak times. The aim is to increase the road capacity by upgrading it to a dual carriageway along its full length between Preston city centre and Cuerden, including the B5253 south of Farington Household Waste Recycling Centre to Longmeanygate.

The proposals also include significant investment to improve cycling infrastructure, with a three metre-wide shared cycle and footway to be constructed alongside the A582 for the entire length of the road with links into existing cycle routes including those on Howick Moor Lane and Broad Oak Lane.

Once the improvements are complete the areas will be landscaped and new foliage will be planted to screen the road from nearby homes.

The A582 dualling will help to enable full development of and access to Cuerden strategic employment site and the adjacent Lancashire Business Park; it will also unlock housing sites to help create over 2,700 homes.

A consultation was held in 2015 on the preferred way of dualling the sections of the A582, which are currently single carriageway and the route for the A582 dualling was adopted by Lancashire County Council.

Golden Way, a section of the A582 from the Broad Oak roundabout towards Preston, was made into a full dual-carriageway.

A number of the junctions along the A582 have also been recently upgraded to add capacity – Broad Oak roundabout, Pope Lane, Chain House Lane, Farington Household Recycling Centre and Stanifield Lane.

In 2019 we contacted members of the public and interested organisations (stakeholders) to obtain views on the consultation which took place from the 24 June 2019 until the 2 August 2019. This helped us to develop a detailed design and highlight issues with the scheme. The way in which we took comments into account is set out in the Consultation Statement within the Environmental Statement. The planning application has now been submitted for approval to the Development Management Service the reference number is LCC/2020/0014.

What is happening next

Below is an outline of the current proposals which have been submitted for approval. 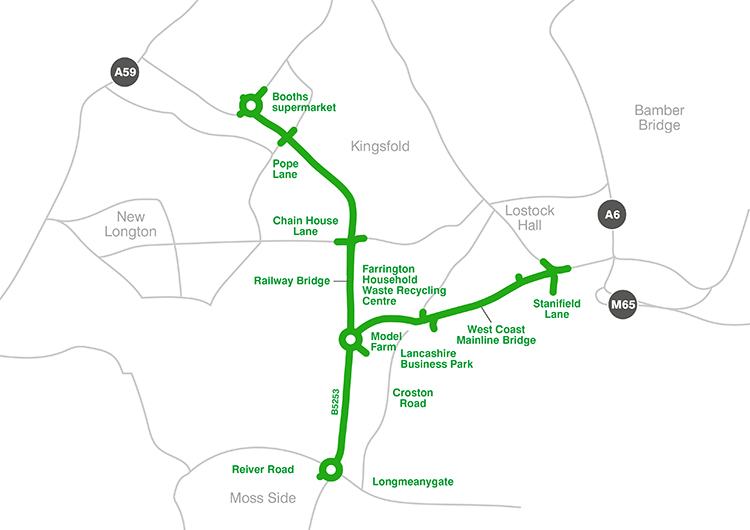 This road scheme will see the remaining lengths of single carriageway widened to provide dual carriageway (two lanes in each direction) along the full length of the South Ribble Western Distributor between the M65/M61/M6 motorway network at Cuerden and Preston city centre, specifically:

The scheme also widens the B5253 Flensburg Way north-south for 1.3km between the Tank roundabout and the roundabout connecting Longmeanygate, Comet Road and Schleswig Way which will be upgraded to a signal controlled junction. This will include reopening of the junction at Longmeanygate and Reiver Road to accommodate changes at the roundabout.

Temporary and permanent environmental impacts from construction and use of the road will be reduced through considerate construction measures during the work programme and from the implementation of proposed landscape and ecological measures. The landscape and ecological measures we propose are illustrated on the A582 Environmental Masterplan drawings.

We have also prepared sections which show how the landscape planting will establish over a fifteen year period after completion of the A582 dualling. The surface water from the road is proposed to be managed by using attenuation ponds which are shown in these proposals. The current proposed route alignment is presented and shows areas which might be used on a temporary basis for construction.

An Environmental Statement has been produced in support of the planning application which states how the scheme has been assessed against the environment and where needed what additional compensation measures are proposed. The full document is available to view on the Lancashire County Council planning register.

Construction works are proposed on both sides of the A582 from south of Chain House Lane to the junction next to Farington Household Waste Recycling Centre at Flensburg Way. The cycle track will be on the Farington Household Waste Recycling Centre side. The Ormskirk Railway crosses the A582 close to Lodge Lane footpath. A replacement bridge will be constructed to accommodate the road under the Ormskirk Railway. The bridge will be designed to accommodate two rail lines.

We propose to retain the existing carriageway for traffic travelling from the recycling centre towards Longmeanygate. The B5253 will be widened by constructing most of the new works including the cycle track on the side of the road open to Leyland Moss (west side) until it meets the junction with B5256 Longmeanygate, Comet Road and B5253 Schleswig Way.

The five-arm Longmeanygate Roundabout is proposed to be replaced with a five-arm signalised junction which maintains direct access to the western end of Longmeanygate. This change was made in response to public comments in the 2019 consultation.

Landscape planting along the edges of the carriageway will comprise minimal tree planting to maintain the character of the open Mossland.

From the recycling centre to Croston Road the A582 dualling construction works are proposed on both sides of the existing road with the cycle track located on the south side.

The double Croston Road roundabouts are proposed to be replaced by a linked signalised staggered junction to serve Croston Road (north and south), Fiddler Lane and Centurion Way. Access to Croston Road (south) will be maintained from the A582, the change to retain direct access was made in response to public comment in the 2019 consultation

A new bridge over the West Coast Mainline will be constructed on the south side of the existing A582 bridge so that the road can be kept fully open during construction.  We propose to retain the existing bridge over the West Coast Mainline. The River Lostock culvert and Fowler Lane underpass will be extended to accommodate the proposed wider approach embankments. We propose to create native woodland planting on the proposed embankments. We propose to tie into the recently upgraded Stanifield Lane junction which is linked to the A6 and M65 by a short section of dual carriageway.

The planning application reference number is LCC/2020/0014 and can be viewed online.

Cabinet decision after the 2015 consultation