Information and advice about Coronavirus and how it affects our services. 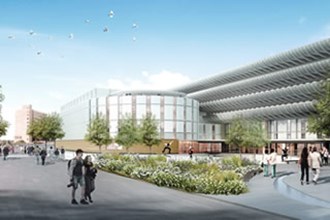 The winning design has been chosen in the architectural competition for Preston's iconic bus station and new Youth Zone Plus.

New York-based John Puttick Associates was chosen from the five anonymous shortlisted entries by the judges.

This was the same design chosen by people as their favourite in the public vote.

For more images of the winning design, visit www.lancashire.gov.uk/competition.

The plans will see a multi-million pound investment in the Grade II listed bus station site, to create a vibrant public space and a home for the new Preston Youth Zone Plus - while preserving the building’s unique brutalist architecture.

The architectural competition was run by the Royal Institute of British Architects (RIBA), on behalf of Lancashire County Council and Preston Youth Zone.

The votes by the public were taken into consideration by the judges, as well as architectural considerations.

Jennifer Mein, leader of Lancashire County Council, said: "We always knew that the bus station had a global appeal, and the fact that the winning firm comes from New York reinforces this.

"We're delighted that a strong design has been chosen for the new Youth Zone Plus and we'll now be working hard to get it built.

"This is a significant investment in one of Preston's most well-known buildings, which will bring exciting new facilities for our young people, for this generation and for future ones.

"It's an exciting time for the city, with improvements taking place on Fishergate and the first steps in the redevelopment of Preston Market. These plans are all part of the Preston, South Ribble and Lancashire City Deal, which is creating new job opportunities, providing new housing and making it easier for people to get around."

John Puttick, the architect behind the chosen design, said: "The Preston Bus Station development is an important opportunity to create a destination that makes a genuine difference for both visitors and the local community.

"The three components of the project - the revitalisation of the modernist bus station, the new OnSide Youth Zone, and a large outdoor public space - offer a rich mixture of uses and the challenge of sensitively introducing contemporary design to the existing setting.

"We are delighted to have been selected as the winners of the competition and are excited to develop the design with the client and stakeholders. We hope to play a game of football on the roof once the project is complete."

The county council and Preston Youth Zone will now work with the architects, John Puttick Associates, to agree on the final design, with the planning application submitted later this year.

Guy Topping, chairman of Preston Youth Zone said: "Preston’s young people deserve the best. The youth zone will be for them so it was vital the winning design struck a balance between the challenges of building next to the listed bus station and meeting the needs of young people.

"We are delighted with the outcome. We feel the winning design really does reflect the young people of Preston with innovation, vibrancy and excitement being key factors. The youth zone will give the city’s young people somewhere to go, something to do and someone to talk to in their leisure time and I am confident the winning design will enthuse thousands of young people."

As an independent charity Preston Youth Zone will be delivered as a result of a powerful combination of public, private and voluntary sector support led by OnSide Youth Zones, a charity dedicated to providing modern youth facilities based on the model of the highly successful and innovative Bolton Lads and Girls Club. Preston Youth Zone will contribute £1m towards the construction costs with Lancashire County Council investing £5m.

Hugh Broughton, RIBA Architect Adviser, said: "Preston Bus Station is a hugely significant twentieth century building and all the shortlisted architects have responded to its bold architecture with skill and empathy.

"John Puttick's winning scheme cleverly resolves the requirements of the On Side Youth Zone to create a building which will be fun, safe and engaging to use while celebrating the original architecture of the bus station and providing flexible open space, which can become a focal point for community events at the heart of Preston life."

The bus station will continue to be a major transport hub, with improved public areas. Maintenance and repair work on the bus station is expected to begin on site later this year.

Planning approval will be required for the Youth Zone Plus, as well as listed building consent and approval from Historic England, before building work can start.

To find out more about the competition, visit www.ribacompetitions.com/preston.

John Puttick Associates was founded in 2014. Their work includes projects in the UK, the US and China and encompasses the public, cultural and residential sectors. John’s designs have been published and exhibited internationally and a book of his drawings is held in the Museum of Modern Art’s collection in New York.

John has designed and delivered an impressive portfolio of projects in the UK, Europe, Asia and the US.

He set up and led Make Architects’ Beijing and Hong Kong offices, where he oversaw a number of major completed schemes including cultural, residential, hospitality, commercial and mixed use buildings, as well as masterplanning and urban regeneration developments. At Make’s London studio, he worked on a major office development at 55 Baker Street, seeing the project through from competition to completion.

Previously John worked for David Chipperfield Architects, where he contributed towards a number of significant public buildings including the Hepworth Gallery in Wakefield and the City of Justice in Barcelona. In the US, he spent a year in Houston working with design studio Acumen on a range of retail and entertainment projects.

Background on the competition:
Almost 100 entries were submitted to the competition, which were anonymously judged by the panel led by Hugh Broughton, architect and RIBA appointed advisor.
He was joined by Rob Carter, OnSide's deputy chief executive; County Councillor Matthew Tomlinson, cabinet member for children, young people and schools; Councillor John Swindells, deputy leader of Preston City Council and Edward Towers, a member of the Lancashire Youth Council representing young people.
The other members of the panel included Jason Homan and Andrew Howorth, architects from the county council; Phil Barrett, Lancashire County Council's director of community services; and John Wilson as a community representative.