John Horrocks Way, the new bypass opened on Monday 2 December at 10.30am.

It was originally scheduled to open in the New Year, but it was ready earlier thanks to the hard work from our team.

We took a trip along the new road while the finishing touches were being done. 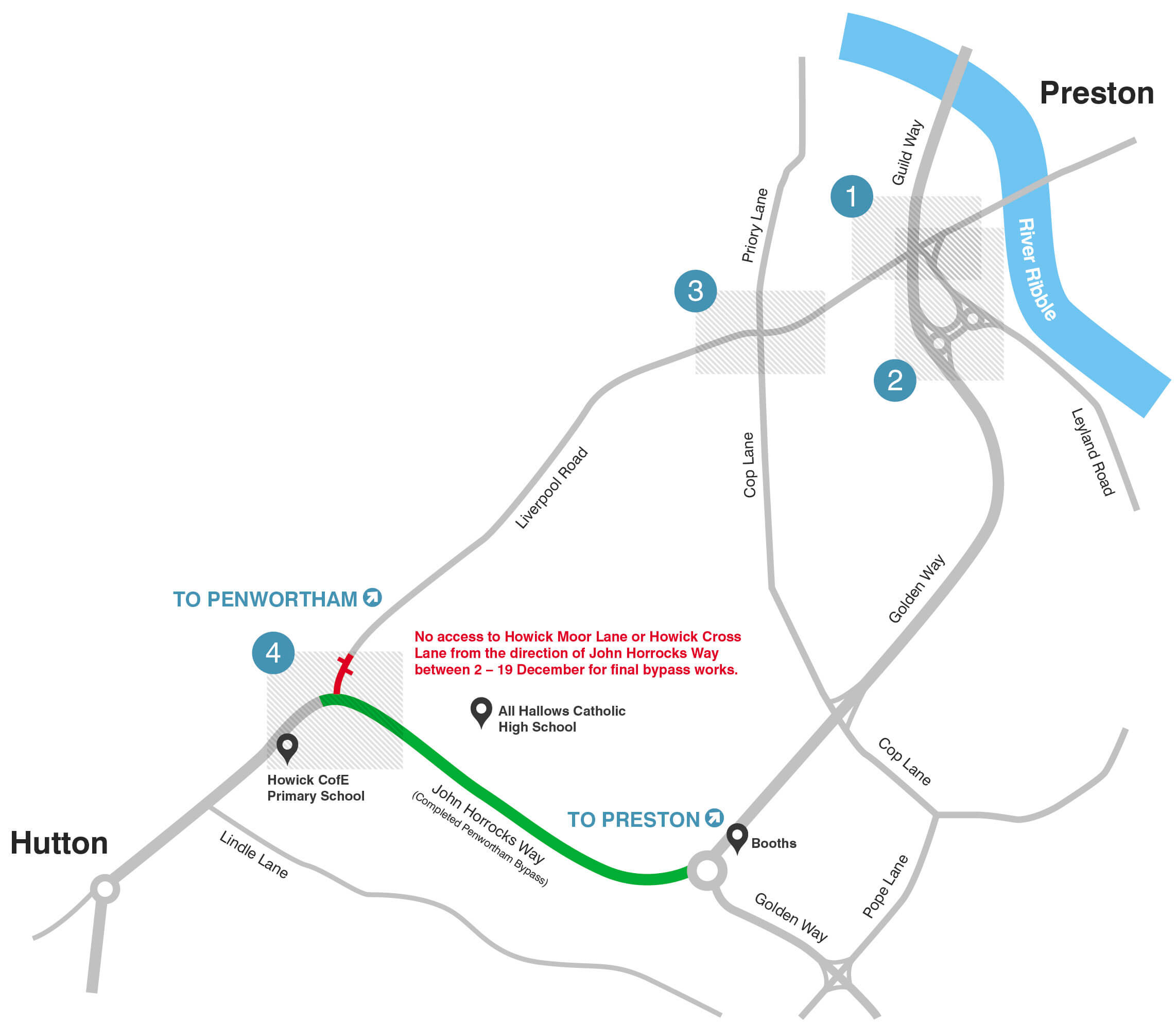 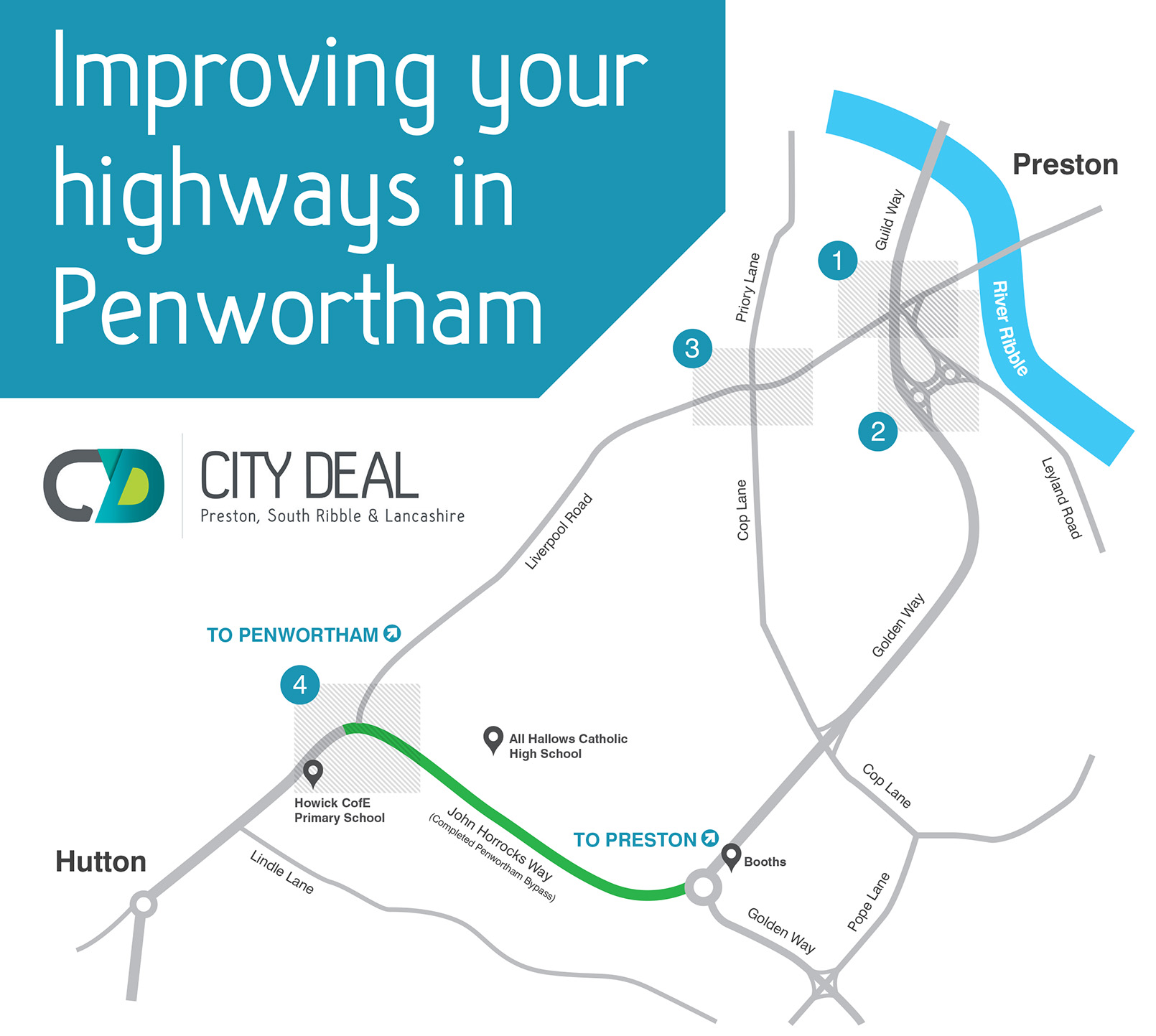 Slip road onto the flyover

John Horrocks Way is the official name for the new Penwortham Bypass. Born in 1768, John Horrocks is one of the leading figures in Lancashire's textile revolution and owned several mills employing thousands of people.

John lived in Penwortham and represented Preston as MP. The new name was suggested by Grace Shields and Laura Gillett from Penwortham Girls High School.

Penwortham Bypass has been talked about for over 20 years and now the funding is in place to complete it thanks to City Deal. This road will help reduce congestion through Penwortham into the city centre and create more opportunities for the village and its residents.

The route for the bypass was approved in March 2015 and since then detailed design work and further traffic modelling has been completed, taking into account comments from the public made during the consultation in late 2014.

Benefits of the scheme

The new road will improve access from the A59 to the motorway network on a purpose built road that does not pass through Penwortham or the city centre. It will reduce congestion in Penwortham and enable us to make improvements so we can encourage more walking and cycling and prioritise buses along the A59.

The bypass runs along the south western side of Penwortham between the A59 Liverpool Road and A582, connecting to the existing Broad Oak roundabout. The road has been designed as a dual carriageway, with a 50mph speed limit along its whole length.

It begins with a new signalised junction on the A59, between Howick CE Primary School and Blackhurst Cottages and a new dual carriageway extends south eastwards between Howick Moor Lane and Mill Brook. The route then turns eastwards to connect to the existing Broad Oak roundabout which is signalised.

Previous proposals suggested a new traffic signal-controlled roundabout connecting the new bypass with the A59 at Howick. However, detailed analysis has shown that a simpler traffic signal-controlled junction will make it easier for pedestrians and cyclists to negotiate the junction, and better promote the bypass as the preferred through-route. This design will also reduce the amount of land needed in this area.

At the new road's junction at Broad Oak roundabout, the number of exit lanes has increased leaving the roundabout onto Golden Way heading towards Preston. This will help current traffic flow through the junction, while also planning for additional traffic in the future.

County Councillor Geoff Driver CBE, leader of Lancashire County Council put the first spade in the ground to mark the start of construction, which is expected to take around two years. Most of the work will take place off the existing highway network.

Jim Carter, Chair of the City Deal, said: "We'll continue working hard to bring even more improvements in the future, with the key aims of helping people to get around, transforming the area and bringing in new jobs and economic growth."

Fly over of the route

Once the bypass has opened, work will begin to improve the public realm through Penwortham, as well as measures to promote walking and cycling in the town centre. It will also provide opportunities to introduce bus priority measures along the A59, from Hutton into the city centre.

We held a six week public consultation from Monday 6 June until Friday 15 July 2016. Members of the public had the opportunity to give their views on the improvements that will be introduced along the A59 and in Penwortham town centre, once the bypass has opened.

People were able to see some early ideas for improving the public realm in the centre of Penwortham, including opportunities to give more space and priority to pedestrians, cyclists and public transport users, as well as ways to tackle local parking issues.

You can view the information shared during the consultation below: